I have found a new clothing line for folks who fall in-between like me. It's called Land's End Canvas. I've always appreciated the quality of Land's End, but sometimes their stuff is a bit too mature looking for me. And so I guess they knew people who fall somewhere in between the junior's section and the misses section - and who are not out to be super trend-setters - would appreciate a modern, classic, casual shop just for them.
Posted by Emily at 10:22 AM 1 comment: 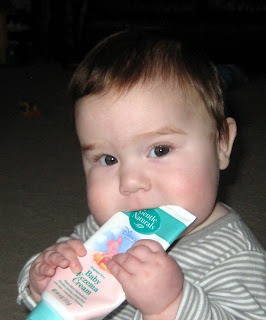 You want me to look at the camera? 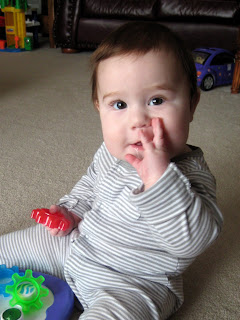 Oh, Mom! You are embarrassing me with all these photos. 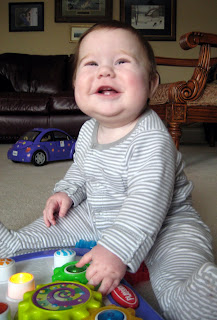 Ok, so I will play along. 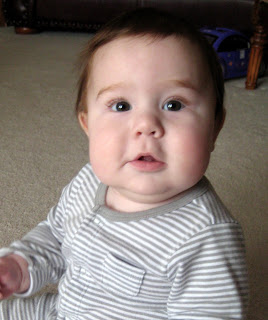 What? No more photos?! Come back here with that camera!
Posted by Emily at 12:32 PM No comments:

My last post sort of got me inspired to continue on with what has made me so proud lately. I have to brag for a minute on my husband. BJ is such a hard worker and provider, he loves Jesus more than anyone I know, he is creative, witty (read: sarcastic), fun, and from my own personal point of view he is warm and cozy like a fuzzy pair of slippers. Lately BJ has been dealing with a lot. Hmm, let's see...he's a full-time sales professional who continues to be top in his region, he's a full-time dad to 3 children, a husband with patience and warmth to spare, a deligent part-time seminary student, an annointed Bible Fellowship teacher, a silent sufferer of rheumatoid arthritis, and a caring son to a mom with stage 4 lung cancer. BJ would probably be embarrassed if I shared this, but here goes...he wakes up every morning at 5 a.m. (3 hours before he needs to be at work) so that he has time to study his Bible and pray and so that he is available in the evenings to give me a break from my "job." Ya'll, he is everything a man should be, and he belongs to me!
Posted by Emily at 5:50 PM No comments:

Email ThisBlogThis!Share to TwitterShare to FacebookShare to Pinterest
Labels: Just the Two of Us, Peek into my heart and mind 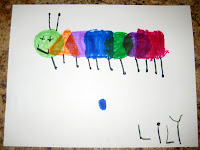 I am sooooo proud of Lily. Today, for the first time, she wrote her own name! This is a huge accomplishment. She was making Valentine's cards for her friends (later we made the caterpillar pictured). I told her she needed to write her name on them so that they would know who they came from. I wrote her name out on a piece of paper and told her to copy it. She did it! She protested at first, "Mommy, you do it! I can't write my name! I can't do it!" I encouraged her to try and she did it the very first time that she tried. I am so proud of her! I love watching my children hit milestones. I feel so blessed when I'm the first person to see them do new things and to see the excitment and sense of satisfaction on their faces when they accomplish something new. I am such a proud mommy today!
Posted by Emily at 5:03 PM 2 comments:

I came across some Peppered Paper prints when I was strolling through the Southern Market today. First of all, the Southern Market is really a cool place. If you live in Knoxville, or are driving through, you must check this place out. (Thanks, Girlfriend, for introducing me to the SM - you know who you are!). Anyway, while I was meandering through the market, I came across some prints done by this artist. I consider myself to be an artist in the fine arts (oil painting) so I don't usually do pieces that would be classified as whimsical or folk art. Many artists in the fine arts community don't usually respect folk arts/crafts and design. But I have an appreciation for those artists who can see the world through a vividly colorful lens and interpret what they see in fun shapes and colors. In fact, many of Peppered Paper designs are quite inspiring and fresh. They would look very sweet in a child's room, and since I have 3 of those rooms in my home this type of art calls out to me.
Posted by Emily at 7:13 PM No comments: 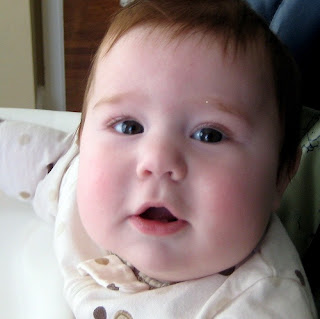 How fast the days go by! I can hardly believe Griffin is just 3 months shy of his 1st birthday. I'm not ready to even think about that.

Griffin has such a sweet spirit. He is content, happy, smiley, and even-tempered. He rarely gets upset. He still lets me know loud and clear when he is hungry or tired, but otherwise he is content to play and watch his surroundings. I guess for a third child, the surroundings are quite exciting.
Griffin is trying more than ever to get into the middle of the action with Schaeffer and Lily. He still is not crawling but he can make his way around a room with a pretty efficient army crawl. I think he'll figure out crawling before too long since he gets up on his knees and rocks back and forth. He is sitting up without support, but he still forgets he is sitting up and then topples over when he reaches for a toy. Griffin is not very vocal. He makes some noises such as Gaaa and Da-Da-Da when you speak to him. He communicates more through expressive eyes and a sweet little grin.
Just a couple of weeks ago his top two teeth came in. We didn't hardly notice that he was cutting teeth because we were busy making sure he recovered well from RSV. Even though I know he felt miserable with RSV - fever, cough and lots of snot - he was such a trooper. And then we noticed the teeth breaking through his gums. I'm sure it only added to his misery during his illness.
Griffin is such an added blessing in my life. I cannot imagine my world without him in it. And, although, some days I wonder what in the world I'm doing with 3 children ages 4 and under {many times I get tired, frustrated, and impatient}, but I still praise God for adding to the joy in my life with such a sweet spirited baby boy!
Posted by Emily at 4:24 PM No comments:

I like this blog because she loves all things pretty. Most of the things she likes are antiques, vintage, and one-of-a-kinds. One of my favorite posts she did was Annettes Hus, the interior of a farmhouse in Norway. I was swooning!
Posted by Emily at 8:09 AM No comments:

We learned last week that BJ's mom has stage 4 lung cancer. It has already spread into her collar bone, skull and liver. She begins chemo on Thursday. She is in her mid-50's and generally healthy so we pray that her body will respond well to treatments. We are praying and hopeful that God will work a miracle in her life so that we may give Him all the glory and honor knowing full well that only He is the Great Healer and Giver of Life.
Posted by Emily at 1:32 PM 2 comments: 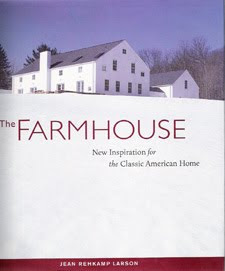 I've been infatuated with farmhouses lately. I'm talking about the good ole, hardworking, American classic. You know, the ones with white clapboard siding, simple foursquare construction, large front porch, and a tin roof. I can't get enough. I've wanted to drive around the area and find some, photograph them, look up photos online, decorate them in my head. It's like some weird illness. I get on these kicks sometimes. I just have to research and exhaust every aspect of the idea before I can move on to something else. So for now, I'm all about farmhouses. I must admit our small town has an amazing sampling of these fine American icons scattered around the area. Some are brick but most are white wood siding. I really will have to capture some photos of my favorites and post them here. Currently there's a farmhouse, Murphy Springs Farm, just outside my subdivision that is undergoing historic preservation. I've enjoyed watching this old beauty come back to it's original grandeur as a majestic settlement for the hardworking American farmer.
Posted by Emily at 8:33 AM No comments:

The Smell of Clorox

The lovely pine and cinnamon scents that filled our home during the holidays has been quickly replaced by the smell of bleach and Lysol. We are still dealing with RSV. And then, last night, the stomach bug entered our home. So far Lily has been the only one to get the stomach bug. She is pitifully miserable. She was still not 100% normal from the upper respiratory infection that struck our home about 2 weeks ago. And I'm still not feeling great, still feverish off-and-on, but nothing like a stomach bug in the house to get me up and movin' to get things disinfected. I'm taking advantage of the caffeine-like side effect of Sudafed. "Get outta here, Germies! There's no more room in this house for you!"
Posted by Emily at 11:55 AM No comments:

The three kids and I are sick. It has hit Griffin the hardest. I took him to the doctor yesterday morning when he was having trouble breathing. He was diagnosed with RSV. I'm sure that's what the rest of us have too, but in children older than 2 it just acts like a bad cold. Everyone around here is crank-y! Thank goodness for snow days and Grandmama. Grandmama stopped by here when school was let out early for snow and picked up Lily. Lily hasn't been 100% either, but her symptoms have been the mildest and she has tons of energy to spare. She will be having a fun time sleeping over at Grandmama and Granddad's house so that I can devote more time between Schaeffer and Griffin. Schaeffer is congested and coughing, but he is still a champ and playing like usual. He has his moments when he begins to whine and get cranky and needs a little TLC from Momma. Griffin, on the other hand, is pitiful. He whimpers a lot, which is breaking my heart. He has a nebulizer and gets breathing treatments every 6 hours. Those, and Tylenol, seem to help him get comfy for a little bit to rest. I'm just praying that we get through this with no additional complications.
Posted by Emily at 5:27 PM 1 comment:

Home For the Holidays {Christmas:2009}

Nothing like a glowing tree-topper to set the mood 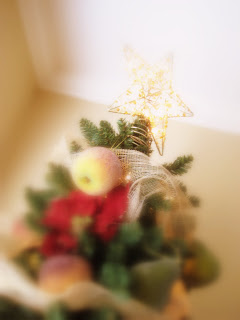 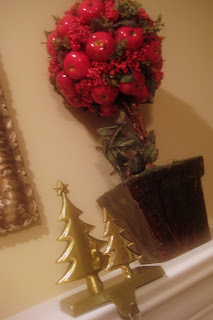 I love to have my dining room table set even though we rarely use it. 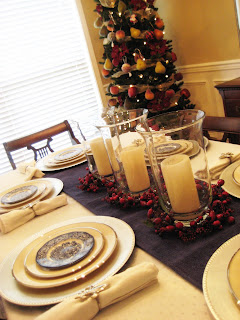 I made cupcakes for Lily and Schaeffer to decorate for Jesus' birthday celebration. 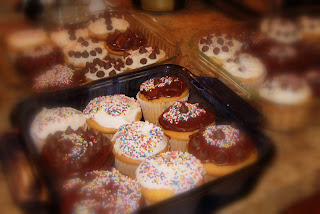 Above the corner cabinets in the dining room. 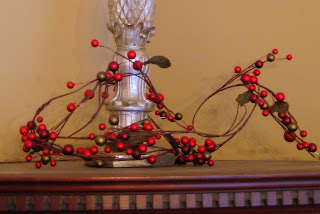 My Apologies for the Mess : Blog Under Construction

Please check back soon! I need an overhaul for 2010. I have some great photos to share very soon...
Posted by Emily at 10:11 AM No comments:

Email ThisBlogThis!Share to TwitterShare to FacebookShare to Pinterest
Newer Posts Older Posts Home
Subscribe to: Posts (Atom)
Many are the plans in our hearts, but it is the LORD's purpose that prevails. Proverbs 19:21