Life Outside the Basket

I happened upon an article in Parenting (Sizing things up, July 2008). The article explained the development of 1-2 year olds. This is an excerpt from that article:

...Once toddlers have mastered walking and can recognize themselves in mirrors, they'll try figuring out how they "fit in" with the world.

Shortly after reading this article, like a day later, I noticed Schaeffer climbing into a basket and then looking at the world around him. He had this look on his face that sort of said, "Hey! Look at me in this basket." Since then he has climbed into other baskets and boxes - laundry baskets, Pampers boxes, toy boxes, etc. He is definitely sizing up the world around him and seeing how he fits in. And that's when it hit me like a lightening bolt! From the very beginning of life each one of us sizes up the world around us from our own point of view. We come from a self-centered viewpoint and we see how things size up around us. Now, developmentally that's a very important step for toddlers and children. But sometimes I wonder how many times we get stuck in that developmental stage - like a toddler - and never move past a viewpoint beyond ourselves?

Certainly Jesus went through the "sizing-things-up" stage as a toddler to the delight of Mary his mommy. If she had had a camera, no doubt she would've snapped some photos of such cuteness. But as he grew he soon found that he fit into the world based on God's plan for him. This is what Jesus prayed to his heavenly Father on our behalf, "I have brought you glory on earth by completing the work you gave me to do...As you sent me into the world, I have sent them into the world...May they also be in us so that the world may believe that you have sent me" (John 17:3, 18, 21).

The Parenting article was a great reminder to me to get outside the basket and view the world from God's point of view. And it's equally important that I instill that same truth into my children. It's okay for now that they are sizing up the world around them to see how they fit in. They need that time for proper growth. But they also need my help to guide them into a viewpoint that looks beyond themselves and looks at the world through the eyes of Jesus. That's an important task, and a very big one. I'll need lots of patience, mercy, and love. I'm so glad Jesus has already prayed on my behalf and is living in my heart to guide me through every aspect of life and parenting. He knew I'd really need him in order to get outside the basket.
Posted by Emily at 11:11 AM No comments:

Email ThisBlogThis!Share to TwitterShare to FacebookShare to Pinterest
Labels: Peek into my heart and mind

I love my Daddy because...

How It Looks From Here 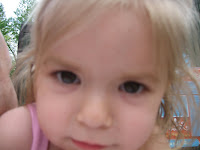 A good friend of mine is getting ready to walk down the long, confusing road of Sensory Processing Disorder (SPD) with her 3-year old son. God has blessed me beyond belief by putting friends and acquaintances in my path at exactly the right moments as we have traveled down the SPD road with Lily starting 25 months ago. Each one of these people that God has sent my way has blessed me tremendously in a way many people will never understand. They have offered their caring hearts, listening ears, and sound advice. I know God has worked out every detail, and even well before I even knew what details to worry about. And if you know me, I worry about details. But God has had it covered each step of the way. I pray my friend will experience that for herself and know that God is in control and He loves and cares for her son more than she will ever be able to - For God so loved us that He gave His one and only son. Because I know God is faithful, and because He has been faithful to reveal His love for me and my family, I can say without a doubt that it is all in His hands. No matter what the it might be today or tomorrow, He is in control and His plans are perfect.

As I was trying to be available for my friend who is starting down this road with lots of questions and doubts for the future, I wrote her an email. It wasn't until yesterday when I looked back at that email did I realize that I had never written down in detail how SPD looks from here - in our home with our daughter. For the first time yesterday I summed up as much detail as possible into one email. I wanted to capture that information here (plus a little more for clarification) as part of my online scrapbook. Honestly, this has been a very therapeutic experience for me, to be able to take the experiences that God has put us through and to be able to share it with others facing the same unknowns, doubts, and fears. I hope this information might help educate, and more importantly, help someone else out there who thinks their child is some way different but they aren't sure why. Even if it's not SPD, I hope it inspires a mom or dad to act on their intincts and seek help and answers early.

"How It Looks From Here"

Most of Lily's sensory issues cause her to be "defensive" while some children experience the opposite by being "under-responsive" or "seekers." Lily experiences sensory defensiveness across the board in all the senses: tactile, vestibular, proprioceptive, auditory, oral, olafactory,and visual. Some areas are more pronounced than others for her, but all of them have had a profound affect on her daily life.

This is how SPD translates in her world. She is very slow to accept change - this includes clothing, food, routines, music, temperature, and the list goes on. Lily has lagged behind in social interaction out of fear and anxiety. She has resisted, but is doing better, at exploring her world, including our home and outdoors. Because of her resistance to exploring and trying new things, she has lagged behind in motor development as well. She finds fine motor skills especially difficult, such as drawing, working puzzles, opening lids, building blocks, etc. Until therapy she avoided playground equipment altogether. When most children have natural curiousity and learn things on their own, I've never been able to assume that Lily is learning skills on her own. She is strictly attached to certain objects – pacifiers and small objects. She is also attached to certain routines – an orderly bedroom, bedtime, and playtime routines are just a few. She has dealt with separation anxieties way longer than expected and has resisted potty training so far. She also has some internal regulation problems (going from sleep to wake or from hot to cold).

And Lily has some language processing problems, such as difficulty discriminating certain sounds especially words that sound similar or are similar (paint brush and piggy bank, just a recent example). She is easily distracted by background noises; has difficulty understanding what is said to her and answering basic questions; has difficulty with talking about a sequence of events and putting her thoughts into words. And she has some processing problems with naming shapes, colors, letters, numbers, etc. Many times she knows the information, but retrieving the information out of her brain is difficult. She has developed "cover-up" techniques because she has realized that sometimes answering questions is difficult. These things have resulted in her developing speech from rote memory - repeating phrases that she had heard. Since therapy, this too has gotten much better and she has much more spontaneous speech.

Her sensory issues earned her a "failure to thrive" diagnosis (no growth for over 6 months) when she was around 18 months old because she hates to eat. Her favorites continue to be the ones that she adopted when she was between 12-18 months. I constantly stay on top of her to eat and she must drink PediaSure in order to thrive and stay at least in the 5th percentile for growth.

Now that I know what I know and I've seen this disorder have such a direct impact on my daughter's well-being and overall health, I am much more confident at trusting my mommy instinct. That's one of the toughest aspects of dealing with a child who on the outside looks very typical (and quite cute), but has some special needs on the inside.

Quadruple ear infection is what you get when you have two kids with runny, snotty noses for over a week. Antibiotics all around!
Posted by Emily at 6:39 PM 3 comments:

Moments With My Sweet Angels 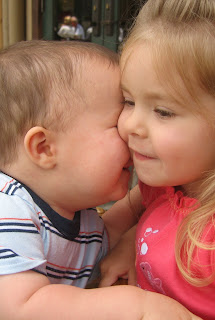 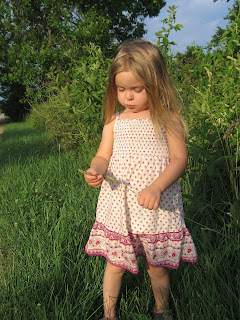 Today is one year from the day you entered our lives. I love you very much! You are so energetic and happy. You are such a blessing to me and your Daddy. Your big sis is so proud of you. I can tell by the way she loves to play with you and make you laugh. You've already grown so much in so little time. I'm happy to be your Mommy and to watch you grow each day. Happy Birthday, my son!

Email ThisBlogThis!Share to TwitterShare to FacebookShare to Pinterest
Labels: LIttle Big Man
Newer Posts Older Posts Home
Subscribe to: Posts (Atom)
Many are the plans in our hearts, but it is the LORD's purpose that prevails. Proverbs 19:21