We celebrated Lily's 4th birthday this past Saturday with a small family party. Lily loves dinosaurs so that was the theme this year, complete with a Baskin Robbins ice cream cake with dinosaurs. She even got her very own baby dino cake with mint chocolate chip ice cream. It was so much fun watching her this year. She now has a good understanding of opening gifts, blowing out the candles, and making everyone wear a party hat - that was her self-assigned job as guests arrived. 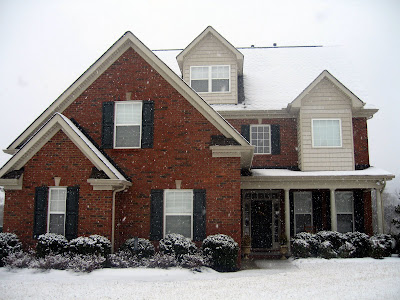 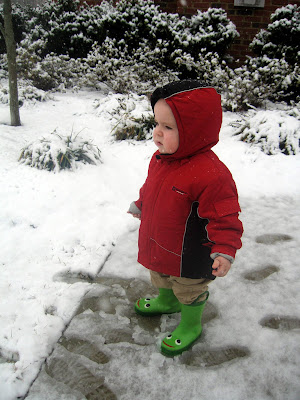 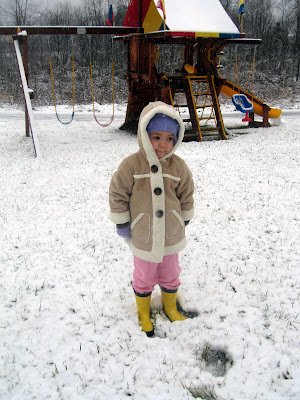 I love good news, but I love great friends even better. Bad news is much easier to take with good friends around. And good news is that much better when you can share it with friends. Today I got good news from my OB appt when the FFN test came back negative, meaning I'm at a much lower risk of going into preterm labor over the next two weeks. Apparently all the precautions we've taken over the past two weeks have helped. I'm supposed to continue doing what I've been doing which is to take Brethine every 4 hours, drink lots of water, and rest as much as possible. And on top of my good news our really great friends Amanda and Shane brought us dinner, not just one dinner but two! Tonight we enjoyed beef tips with rice and peas. Yummy! And, they brought us a homemade lasagna for another night. Yum yum! Even if I'd received some bad news today things would've been made better by a large helping of beef tips and rice.

Yesterday was a slightly different day. BJ had a meeting to attend in Nashville and so he was gone all day until 7:30 p.m. It was the first day in two weeks that I had been all on my own. The kiddos were in rare form. Schaeffer hasn't been feeling good so he's been extra fussy. Lily was wired all day long and began tormenting her brother. Things got a lot worse when Schaeffer fell out of his crib after naptime, probably from trying to climb out. That's the first time he's ever tried that. Without thinking I ran up the stairs and whisked him off the floor. He was fine and he calmed down quickly. I, on the other hand, started having contractions that didn't stop until I was able to lay down when BJ got home. I tried to lay on the couch while the kids played, but then Lily proceeded to pee on the floor (she's trying out the potty-training thing this week). Schaeffer began to melt down because his bedtime is around 7 pm but he gets really cranky about an hour before, and he's not feeling good. And then Lily and Schaeffer collided in the hallway and Lily got a bloody lip. Finally, BJ walked in the door and I went upstairs to lay on the bed because I was really feeling bad by then. Luckily the contractions stopped after laying down for a little while. If I continue to have days like yesterday, I'm not exactly sure how much rest I will be able to get with BJ returning to work. My prayer is that I can stay strong for another 7 weeks because I know once this baby is on the outside I'll be much more energetic, healthy, and able to manage my household the way I like - even if it means I have to drink 3 cups of coffee every day because of all the sleepless nights!
Posted by Emily at 4:45 PM No comments:

An Evening At the Hospital

We had a little bit of a scare yesterday. I started having contractions and my home remedies like lying down, drinking water, and taking Brethine weren't working. I was instructed to go to the Women's Pavilion for observation. After about an hour of contractions 7-8 minutes apart Dr. B's nurse practioner and the doctor-on-call (Dr. B is on vacation this weekend) ordered a shot of Brethine and two bags of IV fluids. The Brethine worked almost immediately and I started feeling a lot better. It took about 4 hours to get all the fluids and then I was sent home after it was determined that the contractions had decreased greatly - I only had 1 or 2 very small contractions after the shot and fluids. I've now been instructed to take Brethine every 4 hours around the clock instead of every 6 hours - the nurse told me to set my alarm at night to wake up so I don't miss a single dose! And I'm to drink tons of water all day long. Brethine makes me feel really shaky and funny so I hate to take it, but if that's what's going to keep Griffin in place for another 7-11 weeks then that's what I'll have to do.
Posted by Emily at 7:54 AM 1 comment:

Email ThisBlogThis!Share to TwitterShare to FacebookShare to Pinterest
Labels: Baby Three and Me

It seems as if little Griffin is being a bit high maintenance! Turns out I'm trying to go into preterm labor...possibly. I've been having a lot of contractions lately. I had an OB appt yesterday with Dr. B. He said the amount and intensity of contractions I am having is not normal at 28 weeks - I sort of knew that since I've done all this before. If I were only having 1-2 per hour that would be okay, but I'm having more like 5-6 per hour and apparently that's too many for now. He did a fetal fibronectin test (FFN test) yesterday and I learned this morning the results of that test were positive (meaning I'm at a higher risk of going into preterm labor). Dr. B is following protocol for a positive result, which means I went this morning for a steroid shot and I'll be getting another one tomorrow. The steroid speeds up the maturity of Griffin's lungs just in case I were to deliver early. In addition, I'm taking Brethine to reduce the contractions I'm having. In two weeks they will repeat the FFN test and see if the results have changed. Fortunately I haven't been required to be on bed rest, but I'm not allowed to lift anything heavy which includes Schaeffer. It'll be tough not lifting Little Big Man since he still needs help into his high chair, into his crib, and up and down steps.

The initial reason for yesterday's OB appt was to take a look at Griffin's kidney's again. He still has more fluid than normal and so we will continue to monitor that situation. Dr. B was very reassuring in explaining that sometimes babies get blockages for various reasons which would make fluid build up in his kidneys. However, he does not have so much fluid that he is at risk of having permanent kidney damage. Nevertheless, Dr. B wants to keep a close eye on things. We'll be visiting Dr. B in two weeks for another FFN test, and in four weeks for another ultrasound to check on kidneys.

BJ had plans this weekend to go to a men's conference in Woodstock, GA. Those plans got cancelled. I feel so bad for him. I know he was really looking forward to getting to take that trip with six of his buddies and hear Johnny Hunt speak at First Baptist Woodstock. But he decided it was best to stay home and take care of me, Griffin, Lily, and Schaeffer. He's such a good Daddy. Right now he and the kiddos are at Bounce USA having a fun time and giving me a little break.
Posted by Emily at 11:18 AM 3 comments:

Email ThisBlogThis!Share to TwitterShare to FacebookShare to Pinterest
Labels: Baby Three and Me

BJ has put together a lot of furniture in our history together. Four years ago, all of Lily's baby furniture came in boxes. And then when Schaeffer was due, we were given another crib which Lily now uses and Schaeffer uses her first set. This donated crib also came disassembled. All of Griffin's furniture is arriving in boxes disassembled. The kids received an activity table this past Christmas disassembled. And we've moved five times in our 10 years of marriage. A lot of our furniture was disassembled and reassembled in one day. BJ definitely has plenty of experience assembling furniture in our home. One thing that never fails, the pieces never fit together right and what should only take 30 minutes turns into a 3-hour project. But, my man never gives up - he perseveres and gets the job done. Because of him we have one piece of Griffin's furniture put together and in place. Maybe in a few more weeks the rest of the pieces will come together and I can begin posting some photos.

We are still encouraging Lily to give up her crib. Last night she was so close to letting it go. She was excited about the idea of getting her crib moved out and a new desk for her coloring supplies moved in. And then in the last minute, she freaked out and changed her mind. BJ was just seconds away from totally dissassembling her crib before the reality set in and Lily realized the crib was going to be gone forever. One thing is for sure, Lily does NOT like change. I think she likes the "idea" of change but realistically she cannot handle change. So for now, with big change on the horizon for everyone in our home, we will keep as many things the same as possible for Lily and Schaeffer.
Posted by Emily at 8:08 AM 4 comments:

Email ThisBlogThis!Share to TwitterShare to FacebookShare to Pinterest
Labels: General, Little Bug
Newer Posts Older Posts Home
Subscribe to: Posts (Atom)
Many are the plans in our hearts, but it is the LORD's purpose that prevails. Proverbs 19:21