On the Home Front

It seems that all I have time to do anymore is post really quick updates. I have so many photos to share, but getting them all downloaded, edited, and filed properly takes time. So I'll just share a few updates to get us up to speed at Phaneroo.

I'm really excited about a photo session we will be doing with Jon Spot Photography in a couple of weeks (the photo at this link was from a Tinkerbell party we attended and that's how I was introduced to Jon's work). He is a very talented "beginner" photographer who attends our church. I just love his work. It's so real and emotional. There's no forced moments and no cheesy poses. He just catches people and kids being themselves. That's what I've been looking for. In addition, I feel like I'm supporting someone with an entrepreneurial spirit whose trying to get his business off the ground. I love that, too.

After a year and four months of occupational therapy, Lily had her last session on Thursday! Yay! But wait...we may be going back for more. Kathy, Lily's OT, has said that Lily exhibits some symptoms of auditory processing disorder, which is common among children with sensory processing disorder. Auditory processing disorder is usually not officially diagnosed until a child begins reading. The signs of the disorder then begin to be very apparent because the child has problems learning letter sounds and has problems with reading comprehension. And because there's not a standardized assessment until age 4-6, we just have to look at some of the other symptoms. So during this last session, Kathy decided to try some listening therapy. Kathy could not believe the neurological responses she saw Lily have once they found the right music. Kathy explained that when they first put the headphones on Lily, which was playing children's music such as Old MacDonald, Lily's expression quickly turned sour. Kathy said even though Lily held it together well, she was on the verge of tears. So Kathy changed the music selection to something that was more similar to classical music. Ah-ha! That was the perfect music! And if you know Lily, you know she loves classical music. Kathy said that Lily bee-bopped around the room with a whole new energy that she'd never seen before. She was not timid, and she eagerly went from station to station in the therapy room. And for the first time ever, Kathy saw Lily have proper nystagmus when on the swing. If nystagmus is not present you can assume that the child has vestibular dysfunction. Kathy was amazed by the changes she saw in Lily with the auditory input coupled with the sensory activities. Kathy is working with a team to put together a listening therapy research project. And if that project comes to fruition, she would like for Lily to be included. And even if the project does not get launched, Kathy is still very interested in getting Lily back into therapy with some headphones and music. I had to laugh at Kathy's findings. Lily has always loved classical music. When she's listening, it's like she becomes very intense and focused. And she rarely tolerates regular radio in the car. If the stereo is on, it must be Beethoven, Bach and Mozart. When I explained that to Kathy, she was just simply amazed!

Schaeffer had his first official speech therapy session last week as well. He did great. When it comes to saying words, that boy is stubborn. Dee was trying all kinds of very interesting tactics to get him to say words like bubble and pop -- both sounds he can make because we've heard him make various "baa" and "po" sounds. Schaeffer enjoyed every moment of the session because he gets a full hour of uninterrupted one-on-one floor time with Dee and some really neat toys. It's totally worth the $9 co-pay!

As for Baby Three. We're still truckin' along. I failed my first glucose screening. Surprise, surprise! Because I had gestational diabetes with Schaeffer, I had to take the glucose screening at 12 weeks. I failed the screening by 5 points. Luckily, Dr. Brabson didn't feel it was necessary that I take the 3-hour glucose test. I was ready to refuse it anyway because I'm already following the diet and sticking my finger. There's nothing more to know at this point. I'm just praying that the diet does the trick otherwise I'll have to start medication. The medication can be tricky because it can cause sharp declines in glucose levels causing hypoglycemia. I've lived with hypoglycemia long enough to know I don't want any sharp declines. I can't help but be a little frustrated over the diabetes issue. (Warning: I am going to whine a little). I am a young, healthy, active woman. I started this pregnancy at the same weight that I was before I was pregnant with Lily. I exercise regularly, and was even running three days a week before the morning sickness struck. I see so many unhealthy, pregnant women who eat whatever they want, gain as much weight as they want, and still have no glucose or blood pressure problems. I even overheard my first OB/Gyn mention to a nurse how ironic it was that I was such a healthy person but still struggled with diabetes and bp problems during pregnancy. I guess you just never know what those hormones will do until your in the middle of it all. I'm still very grateful for the little blessings God has given me and BJ. Sometimes a pregnant woman just has to whine!
Posted by Emily at 4:36 PM 3 comments: 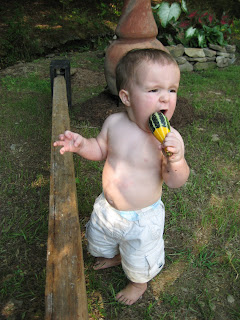 Okay, so this post may not qualify for publication in the Journal for American Academy of Pediatrics, nor is it based on a super scientific study involving 1,000 children or more. But since I birthed a daughter first and a son second, I've become qualified to make some keen observations and comparisons the past 16 months that have led me to believe that boys really are different (please see disclaimer below before proceeding):

1. Anything with wheels on it is an instant attention-getter and it quickly becomes the favorite toy. Second favorite is any kind of ball.
2. Communication skills may be slower to develop than other developmental skills, and the words "vroom, vroom" will proceed all other words including "mama" and "dada." Although the word "ball" may be the exception to this rule.
3. Anything that rises vertically from the ground is considered a mountain that must be conquered despite numerous injuries from previous attempts (and despite negative reactions - including screams of panic - from onlookers).
4. The unquenchable love of electronics starts at birth, and quite possibly at conception.
5. Testosterone must be responsible for rapid growth of eyelashes. Boys can grow them thicker and longer than any female.
6. Testosterone must also be responsible for decreased hearing.
7. Throwing objects is just as important as mouthing them.
8. Cognitive skills expand greatly after watching an object bounce off the wall and crash at high speeds onto ceramic tile flooring - some would call it a study in physics.
9. Regardless of his brute strength and matchless determination, he still cries easily if Mama leaves the room or tells him "No."
10. Lastly (and most baffling), there's a definite fascination with a certain body part.

*Please read this article only if you agree to the following statement: I agree not to hold the author of this post responsible for injury to the self-esteem of any male. I will not accuse the author of stereotyping. I understand that the author has made some very valid statements based on observations and in-depth study of a perfectly cute and healthy baby boy whom she loves and cherishes very much.
Posted by Emily at 4:30 PM 3 comments:

Email ThisBlogThis!Share to TwitterShare to FacebookShare to Pinterest
Labels: LIttle Big Man, Peek into my heart and mind
Newer Posts Older Posts Home
Subscribe to: Posts (Atom)
Many are the plans in our hearts, but it is the LORD's purpose that prevails. Proverbs 19:21