His Name is Jake 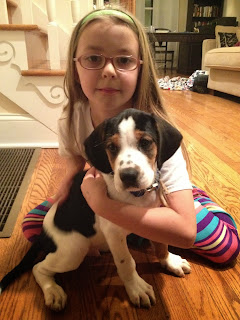 We named him Jake. It just seemed to be a good Treeing Walker Coonhound name. Lily is smitten. He's gotta be one of the snuggly-est doggies I know. He's not content unless he's on a lap with his nose nuzzled into your neck. Jake sleeps in Lily's bed with her. That seems to make both of them very happy. Jake is doing well with house training with less accidents every day. He knows how to sit on command, and he's learning his boundaries as far as what he can chew and what he cannot chew. It's been said that hound dogs aren't all that smart, but this boy is breaking the hound dog mold. This boy is pretty smart, and a real family man. I've owned a hound before, a Bassett Hound named Oscar. He was sweet but annoyingly stubborn and difficult to train. Jake, however, responds perfectly well to correction and doggy treats.  The vet says he'll probably weigh between 60-70 pounds. He'll know for sure how to estimate his growth when he sees him again at his next vet visit. According to the vet, if he gains 2-3 pounds per month then he will reach about 70 pounds at adulthood. However, if he gains 4-5 pounds per month he'll probably reach 80-90 pounds at adulthood comparative to a large Labrador. We saw Jake's mother at the shelter where we found Jake. She was a good-sized Coonhound, probably 70 pounds. But we aren't familiar with Jake's father so time will tell how he turns out. For now, the kids (and their momma) are all about Jake.
Posted by Emily at 7:43 PM No comments:

Email ThisBlogThis!Share to TwitterShare to FacebookShare to Pinterest
Labels: Jake the Wonderdog

It's a tradition with my family to hike the day after Thanksgiving. No shopping and bargain hunting for us. No sir-ee! We hit the trail. Go here to get a glimpse of the day through my uncle's lens.
Posted by Emily at 7:42 PM No comments:

Over the past 9 years, we have added a new family member every two years. Hence the ages of our children - 2, 4, 6, 8. It seems the tradition continues with our newest addition…


We sign the paperwork tomorrow (Monday) and pick him up on Tuesday after he's neutered. He was a perfect gentlemen with the kids - friendly, lovable, and even sat at their command. He will be one big lap dog.
Posted by Emily at 5:36 PM No comments:

Email ThisBlogThis!Share to TwitterShare to FacebookShare to Pinterest
Labels: Jake the Wonderdog
Newer Posts Older Posts Home
Subscribe to: Posts (Atom)
Many are the plans in our hearts, but it is the LORD's purpose that prevails. Proverbs 19:21