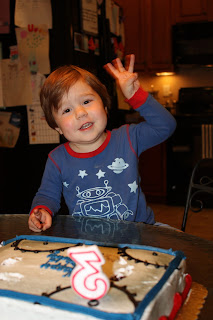 Monday was Big G's 3rd birthday! Griffin is a compact bundle of joy, smiles, and mischief. He has the sweetest smile with big round cheeks and eyes that sparkle. I think he's pretty cute! BJ accuses me of being too lenient with him. But shoot! When he's up to no good, he shoots me a mischievous grin and bats his big eyelashes and I'm immediately disarmed.

Griffin is fearless. He keeps pace with the big kids, climbing, riding a bike, jumping, playing ball, and wrestling with Daddy and Schaeffer. He loves to snuggle still. I love that even though he's a typical active little boy, he's always greets me with a hug and offers up big pucker kisses. Right now he loves cars and trucks, super heroes, dragons, and hitting the baseball in the backyard. He loves to play with Lily and Schaeffer, even though sometimes they don't want their little brother to tag along. When he gets squeezed out of big-kid play, he is content to play independently.

He loves to sing, especially "Twinkle, Twinkle" and "Jesus Loves Me." He says some funny stuff, too. He calls the Buddy's Bar-b-que sign "piggy chef." When he's mad at Schaeffer he says, "stinky boy!" (I usually remind him that it's not nice to call names.) When he doesn't want something, he used to say, "I hate that!" But because that's not nice, we taught him to say, "no thank you." Now he yells, "No THANK YOU!" Now we just have to work on the tone, but we are making progress :-) He has all sorts of phrases that he tries to use to avoid getting into trouble: "Schaeffer made me do it," and "I didn't mean to" are the common ones. It's amazing how quickly toddlers learn to use language to manipulate others and to shift blame.

Griffin is very small for his age, still wearing 24 months and 2T sizes. But his personality is so large you don't really see him as small. People comment to me all the time about his big personality, how he is fearless and never appears shy. That's definitely my boy! Happy 3rd birthday Big G!
Posted by Emily at 8:49 AM